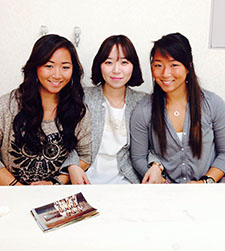 As so many of our Korean adoptees are reaching adulthood, we see more and more who want to return to Korea and learn about their homeland and culture.  Eastern Social Welfare Society (ESWS) and the Korean government recognize this need and know that resources are sometimes limited for young adults to afford such an expensive trip.   In addition to an annual Culture and Language Program every summer, they also sponsor the Home to Home Program every late Fall.  (New Beginnings will post when the Home to Home application is available.) They cover nearly all expenses of the week-long trip, which includes room, board and sightseeing expenses.  When there is an opportunity, adoptees are also able to have reunions with birth family members.  Read about Danielle’s experience with the trip. Her twin sister and she traveled to Korea last Fall to reunite with their triplet sister, birth mother and older sister:

I have known about my triplet sister and older sister since the earliest I was able to understand. My sister, Kaitlynn, and I finally sought out to find our family in Korea this year. Shortly after we first made contact with them via e-mail, we were accepted to the “Home to Home” program. I had no idea what to expect from the program, but I was nervous and excited at the same time to finally meet our family. We had found out a little information prior to our trip, so we knew who we would be reuniting with. I had so many questions and just hoped to find the answers that I was looking for.

Having never traveled to Korea, the program was the perfect way to guide us through this journey. It was nice to have somewhat of a schedule as a baseline for our week there and also to have time for ourselves to plan days with our family members and ourselves to explore. Of course, meeting our family was the best thing that this program provided for me. After leaving Korea, I felt so much closure from the answers I was able to get from our triplet and mother to questions I had had for so long. While my life had been fulfilling in every aspect, it felt like there was still something missing until I was able to finally reunite with my birth family. It was a bittersweet reunion – as glad as I was to meet everyone face-to-face, I learned of the hardships I may have endured and the story behind my adoption.

I thought that Korea would have been so much different than America, specifically New York, where I live. While it definitely had its unique characteristics, I found that it was still very similar to home. I felt that I got a little taste of everything…literally with Korean cuisine (which I absolutely loved), seeing various cities, Korean lifestyle, and even traveling up NamsanMountain. One of my favorite parts of the trip was visiting the nursery at Eastern and Pyeong-taek Welfare town. It wasn’t simply due to the cute babies…it was nice to see the nursery where I think I spent some time as an infant. It was also very comforting to see the support that Eastern provides for those unfortunate in all different situations. It made me realize how much I would like to adopt from Korea, and provide a child with an opportunity like I had.

I am so thankful for this opportunity and support that Eastern has provided me with. I hope to return to visit Korea again someday. I think that this trip has really given me the motivation to further learn about the culture and country that I am from. I’m craving those sweet Korean pears!

You have Successfully Subscribed!